Posted on May 18, 2020 by Saint Barnabas Anglican Church of Seattle

The Gospel of Luke (Chapter 24 verses 44 ff) tells us that, after his Resurrection, Jesus stayed with his disciples 40 days, teaching them from the Scriptures (what we call the Old Testament) that it was necessary that he should suffer and then rise from the dead. He then told them to stay in Jerusalem and then, blessing them, he “withdrew from them and was carried up into heaven.” See also the Acts of the Apostles, Chapter 1 verses 8-9.

The resurrected Jesus was still human but more than human. He was able to appear in closed, locked rooms and to disappear at will. His choice of a means to depart this life was made to comfort the disciples. He didn’t pop like a soap bubble, which might have suggested that he had been an illusion. He didn’t slowly fade away or dissolve, which might have suggested that he was being pulled away by some outside force. He had said he was going to the Father. The disciples knew that God does not live in the clouds, but they also knew that God had been depicted that way (to show that he could survey the whole earth at once). Jesus the Son’s choice, to rise up (ascend) out of the disciples’ sight, showed them that he was in control and returning to the right hand of the Father.

St. Barnabas will celebrate the Ascension on Thursday, May 21, at 7:00 pm to 9:00 pm. Because of ongoing Covid restrictions, we will have our usual drive-through Eucharist. You can drive through at any time between 7:00pm to 9:00pm. Come and share in Jesus’ body and blood in a hygienic, socially-distanced way. You will not need to leave your car. We remain Socially Distant yet Spiritually connected. 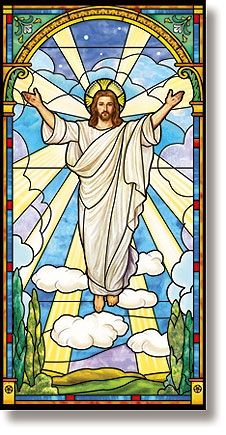