Why Did the French Priest Save the Body of Christ From the Fire?

Posted on April 25, 2019 by Saint Barnabas Anglican Church of Seattle

During the terrible fire at Notre Dame in Paris, a group of fire fighters and volunteers worked to save irreplaceable treasures from the building.  It was said that a French priest had carried out the “body of Christ” and one reporter thought this meant some kind of statue.  In fact, the phrase refers to the consecrated bread used in the Eucharist (or Mass).  What’s the deal?

At the Last Supper before his arrest and crucifixion, Jesus told his disciples that the bread shared at the Jewish festival of Passover would take on a new meaning.  The apostle Paul explained this to the new Christians in Corinth (I Corinthians 11):  “Jesus on the night when he was betrayed took a loaf of bread, and when he had given thanks, he broke it and said, ‘This is my body that is for you.  Do this for the remembrance of me.”  Over the centuries, Christians have broken bread together with prayers and spoken of the bread as the “body of Christ.”  Early critics of Christianity heard about this practice and accused the Christians of cannibalism.

St. Barnabas, along with other churches in the Anglican (and Roman, and Eastern) traditions, holds that the Eucharist (which comes from a Greek word meaning “thanksgiving”) is not just a meal of fellowship and reminiscence.  It is an actual participation in Jesus’ gift of his Body.  How this works is a mystery but that it works is, we believe, guaranteed by Jesus’ own words.

Notre Dame, like many churches, kept a portion of consecrated bread for use between services.  It was because he believed that consecrated bread is not just ordinary bread that the French priest made the effort, presumably at some risk to himself, to bring it safely out of the fire.

Watch this space for more about the Eucharist and why it is central to what we do at St. Barnabas. 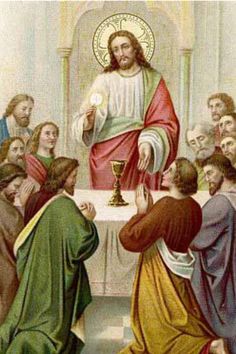