Posted on January 18, 2019 by Saint Barnabas Anglican Church of Seattle

The season of Epiphany recalls ways that Jesus was revealed or manifested as the Savior, the one sent from God (in fact, as it turned out, God himself).  We talked about the visit of the three wise men.  Another event recalled in this season is Jesus’ baptism at the Jordan River. 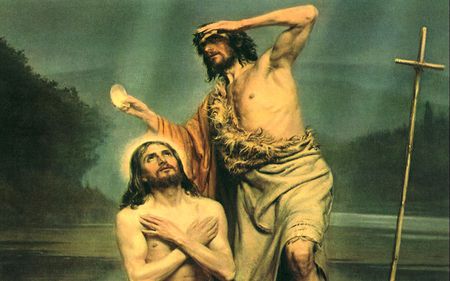 Baptism amounted to dunking under the water and was the signature action of a fellow called John (called, not surprisingly, the Baptist).  John used baptism as a symbol of dying to sin and being reborn to a new life.  He called people to repent of their sins, that is, to change their lives and draw close to God through prayer and good works. When asked by the religious authorities who in the world he thought he was, he answered that he was preparing the way for one greater than himself.  When Jesus arrived at the scene, John recognized him as the “greater” one to come.  Jesus submitted to baptism and there was a miraculous sign (the gospel writers describe it in different ways) confirming John’s acclamation.

Another early sign was, as the Gospel of John describes it, the first miracle that Jesus himself performed.  He was at a wedding at Cana in Galilee.  Then as now, weddings were celebrated with parties, food, and drink.  But they ran out of wine.  Apparently reluctant, but at the urging of his mother Mary (there is a story here), Jesus miraculously transformed water into wine, such excellent wine that it was remarked upon.

This was no mere parlor trick.  All of Jesus’ miracles had theological meanings.  Part of the meaning here, as noted by C.S. Lewis, is that Jesus’ miracle points to a larger miracle that God performs every day (though more slowly):  rains fall, grapes grow, and grape juice ferments into wine.  Looked at in this way, the miracle at Cana reminds us of the constant gifts of God.  And that is typical of Jesus:  he was always looking to his Father in heaven with love and urging us to do the same.