Posted on October 1, 2018 by Saint Barnabas Anglican Church of Seattle

St. Barnabas Blog (SBB):  We were talking about the Hebrews in Egypt and their escape after a series of plagues caused Pharaoh to let them go.

Anaiah:  Yes.  This was not simply a political event.  Pharaoh himself puts it most clearly when he says to Moses:  “Rise up, go forth from among my people, both you and the people of Israel; and go, serve the Lord, as you have said.”  Exodus 12:31.  The Hebrews knew, as even Pharaoh grudgingly recognized, that they had been singled out from all the peoples of the world to serve one God.  Remember, this is connected with the promise made to Abraham, that his people would serve as a light to all the peoples of the earth.

SBB:  But didn’t Pharaoh pursue the Hebrews after agreeing to let them go?

Anaiah:  He did, along with his army.  The Hebrews fled until they came to a body of water that barred their path.  At that point, with God’s help, the waters were parted and the Hebrews were able to make their escape.  Pharaoh’s army attempted to follow but were destroyed when the waters returned.

Anaiah:  Happen?  Yes, though again I believe that legendary details may have grown up around the story.

SBB:  What do we learn about God from this?

Anaiah:  God speaks to us symbolically.  The creation story (Genesis 1:6) describes the entire world as being made by parting the primeval waters.  Now we read that Moses and the Hebrews were saved when God parted the waters. We will see the same image repeated later in the story.  I conclude that God is teaching us something about water and salvation, but as happens often, the teaching is indirect.

SBB:  What happened after the Hebrews are safely across the water?

Anaiah:  They marched off into the wilderness (what is now called the Sinai Peninsula).  This was a very inhospitable place, almost devoid of vegetation.  Soon the supplies of drinking water and food ran short.  But God helped them through miracles.  This was, I believe, another lesson.  God was training the people to be completely dependent on him.

SBB:  Wasn’t this lesson already taught in Egypt and at the crossing of the sea?

Anaiah:  Yes, but this lesson is evidently hard to learn.  We will see this throughout the desert journey and beyond.  In fact, this goes to the heart of our relationship with God.  Abraham was tested when he was asked to sacrifice Isaac.  Adam was tested in the Garden.  The question keeps coming up:  will you trust in God or will you try to invent your own security?  Ultimately, this comes down to the question:  will you admit that God is God, or will you try to be your own god?  Trusting God leads to life, trusting in one’s own resources leads to death.

SBB:  What does it mean to trust in God?

Anaiah:  We see it illustrated in the desert.  Despite repeated miracles, the people complain and express fear about the future, but God saves them.  And then he brings them to the mountain where Moses had first seen the burning bush.

Anaiah:  God was going to appear to the people, to teach them how to live according to his laws.

SBB:  Why were laws necessary?

Anaiah:  Laws were not necessary originally.  Adam and Eve lived in the Garden with only one, almost token rule.  But God is merciful.  He recognized that the Hebrews were not ready for complete freedom.  They needed direction.  In the same way, we teach children by giving them rules to live by, hoping that they will eventually learn to govern themselves.

SBB:  So what happened at the mountain?

Anaiah:  That’s a story in itself for next time. 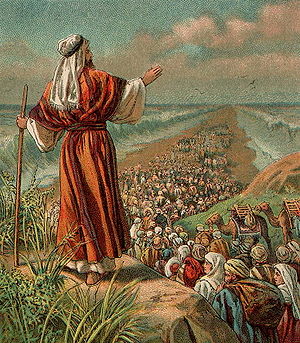