Posted on August 7, 2018 by Saint Barnabas Anglican Church of Seattle

A previous post talked about the doxology written by Thomas Ken, beginning “Praise God from whom all blessings flow.”  These well-known words have an equally well-known tune, commonly called the “Old Hundredth.” For the origins of this tune and its name, we need to go back to the early days of the Reformation in Europe.

One point stressed by the early Reformers was that church services should be “in such a tongue as the people understandeth” (as the Thirty-Nine Articles have it).  This included not only Bible readings and prayers, but also singing.  Music in the traditional church services of the Sixteenth Century incorporated stately chants in Latin, usually by clergy or trained choirs.  Both Luther in Germany and Calvin in Geneva set about to provide alternatives.  Calvin began to translate the Psalms into French, but soon turned that task over to a poet named Clement Marot.  Calvin commissioned composer Louis Bourgeois to prepare tunes suitable for the newly translated Psalms.  Bourgeois and Marot did not complete the work, but others took it up.  Various partial editions were published and by 1562 the entire set of Psalms (and some other Biblical texts) were available for use in French, set to 126 different tunes (some tunes were used more than once).  The new tunes contrasted with the traditional chants (Queen Elizabeth of England reportedly called them “Genevan jigs”), but they became very popular.  The whole collection was known as the Genevan Psalter and the tune we know as the “Old Hundredth,” was the setting for Psalm 134 (in French) in that collection.  The tune is attributed to Louis Bourgeois.

Meanwhile, various people were working to translate the Psalms into English.  One of them was William Kethe, who was active in Geneva.  His best-known translation was of Psalm 100 (also known by its Latin name, the Jubilate Deo), which begins, “All people that on earth do dwell, sing to the Lord with cheerful voice.”  Kethe’s translation of Psalm 100 was included in a collection of English Psalms published in 1562 and based in part on the Genevan tunes.  This “Anglo-Genevan Psalter” used the tune from the French text of Psalm 134 and applied it to the English text of Psalm 100.  That is the origin of the tune name, “Old Hundredth.”  The Anglo-Genevan Psalter remained popular until the 18th Century, when tastes in church music changed and new hymns, not directly based on the Psalms, came into widespread use.  Somewhere during this period it was noticed that the Old Hundredth tune worked well with Thomas Ken’s doxology, and the two have been paired ever since in many collections of hymns and sacred songs.

So we see that examination of one small part of the Anglican liturgy takes us back hundreds of years to appreciate the work of many hands working to promote fitting worship of God in the Church. 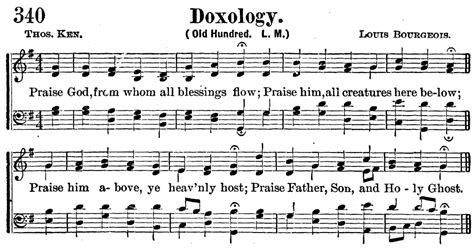