Posted on March 23, 2018 by Saint Barnabas Anglican Church of Seattle

The season of Lent has been a preparation for Holy Week and the events leading to Easter. Check out the calendar and join us for the following:

Palm Sunday, March 25.  Following his ministry of preaching and miracles, Jesus turned his face to Jerusalem, the holy city.  Many of his followers doubtless expected that he would reveal his identity as the long-awaited Messiah mighty acts that would reveal his divine kingship and drive out the hated Romans.  Instead, he entered the city peacefully, riding on a donkey, as his followers spread palm leaves to soften his path.  The Jewish leaders and most of the people turned against him and, allying themselves with the Romans, brought about his execution a few days later.  The Palm Sunday liturgy recalls both Jesus’ celebratory entry into Jerusalem and his condemnation by the religious authorities.

Maundy Thursday, March 29.  On his last evening with his followers, Jesus instituted the sacrament of the bread and wine, the Eucharist, which we celebrate every Sunday.  He also gave his followers a new instruction, or mandate, or “maundy” in its older English version:  to love one another as he loves us.  It is remarkable that, facing death at the hands of the stubborn religious leaders, the unheeding multitude, and the foreign oppressors, that Jesus’ final thoughts should be on love and forgiveness.

Good Friday, March 30.  This liturgy recalls Jesus’ execution.  As he carried his cross to the place where he was to die, tradition distinguishes fourteen incidents that are often represented in pictures called “stations of the cross.”  This liturgy uses those pictures as a focus of devotion.

Easter Eve, March 31.  In the Jewish and early Christian reckoning, each day began at sunset, so Easter Day (which is Sunday April 1 this year) begins (traditionally) at sunset on Saturday March 31.  This liturgy celebrates Jesus’ resurrection from the dead and all that it means to us through the centuries and to the end of the world.

You are welcome to join us for these liturgies.  As you can see, they complement one another so the more you attend the more you will immerse yourself in sacred things of everlasting importance.

Maundy Thursday – March 29th A single service at 7:00 pm followed by a vigil at the altar of repose.

Good Friday – March 30th the vigil concludes at Noon and the elements are restored to the tabernacle. A service of Stations of the Cross will be observed at Noon and 7:00 pm.

Holy Saturday & Easter Eve vigil March 31st 7:00 pm We begin with the service of New Light followed by baptisms and renewal of vows and the first Eucharist of Easter Day. 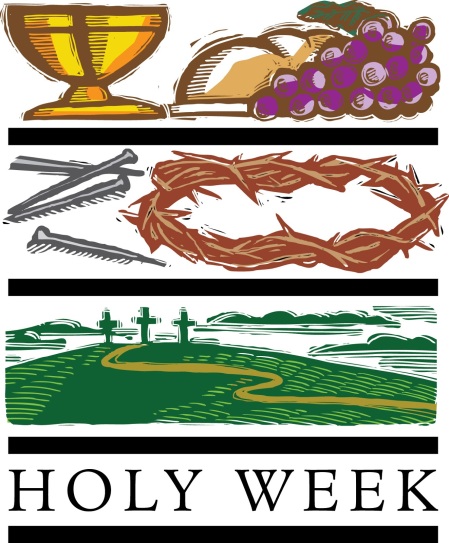