The End of the Easter Story, and a Beginning for the Church

Posted on June 3, 2017 by Saint Barnabas Anglican Church of Seattle 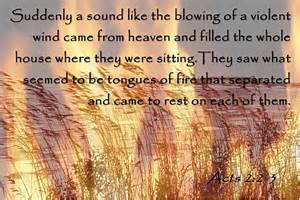 During the forty days that Jesus stayed with his followers after his Resurrection, he told them to stay in Jerusalem until they received the “baptism of the Holy Spirit.”  There is no indication that his followers knew what this meant, but they stayed and continued to pray together after Jesus ascended on the fortieth day.  Jesus died on or near the Jewish holiday of Passover.  Fifty days later there was another Jewish festival called Shavuot (meaning weeks) or, in the common Greek of the time, Pentecost (from the Greek word for fifty).  This holiday originally celebrated the first wheat harvest of the year, and later came to commemorate the giving of the Law to Moses on Mounty Sinai.  The Jewish celebration included waving two sheaves of wheat (symbolizing the “first fruits” of the harvest) in the great temple at Jerusalem.  The Book of Acts, Chapter 2, tells us:

When the day of Pentecost had come, they were all together in one place.  And suddenly from heaven there came a sound, like the rush of a violent wind, and it filled the entire house where they were sitting.  Divided tongues, as of fire, appeared among them, and a tongue rested on each of them.  All of them were filled with the Holy Spirit and began to speak in other languages, as the Spirit gave them the ability.

Just as Shavuot is in a sense the birthday of Judaism (based on the giving of the Law), Pentecost is considered the birthday of the Christian Church, when the Holy Spirit gave power to the members to preach to people all over the earth, symbolized by their ability to speak in multiple languages.  Just as the Jewish festival involved “first fruits” of the harvest, St. Paul came to speak of Jesus as the “first fruits” of the triumph over sin and evil and death.  It is traditional to read the Book of Ruth on the Jewish festival.  This story tells how Ruth, a Gentile woman, came to join the people of Israel and even became an ancestor of King David.  The Christian Church began very early to incorporate Gentiles (Greeks and Romans) along with Jews into the Kingdom promised by Jesus. So on Pentecost we rejoice that God has given us the Church.  Flawed though it may be, it is a precious heritage.