Posted on June 21, 2019 by Saint Barnabas Anglican Church of Seattle 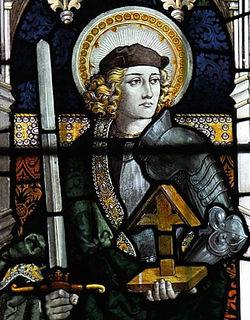 Tomorrow, June 22 is the feast day for St. Alban, who is remembered as the first British martyr.  It is difficult here to separate fact from legend.  He is supposed to have died around the year 304, but the best known version of his story first appeared in the Ecclesiastical History written by the British church historian Bede around 400 years later.  The story is set at a time when the Romans occupied Britain.  Alban was living at Verulamium.  (The town is now called St. Alban’s; it was very important in Roman times.)  There was a persecution of the Christians and a Christian priest asked Alban to hide him. Alban took him into his house and was soon converted to Christianity and baptized.  When soldiers came to search the house, Alban disguised himself as the fugitive and was arrested in his place. He proclaimed his belief in Christianity and was condemned to death. It is said that his executioner was so impressed with his witness that he refused to perform his office and a second executioner had to be found.